The Clare Mixed Netball Team has always been a very fun and friendly team to join. We are currently in division 1 of the mixed college netball teams (yay!) but don’t let that intimidate you as we are a very relaxed team, and welcome players from all levels of experience – several of us currently on the team had never played netball before coming to university!

For a mixed team there needs to be a minimum of three players of either sex and matches will usually be hosted at other colleges’ netball courts (because ours are so far away that other courts are usually much more convenient). We don’t currently hold training sessions, but we are very willing to organise some if there is sufficient demand!

This term, due to Covid, all college netball matches are going to be friendly, so we won’t lose our spot in div 1! This is a great opportunity to come along, try out a new sport or get in some practice before we (hopefully) resume competitive matches in Lent term.

If you would like to join the team! Email either of the captains and we’ll add you to the Facebook group and group chat. 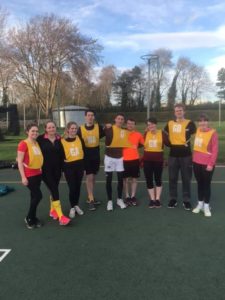