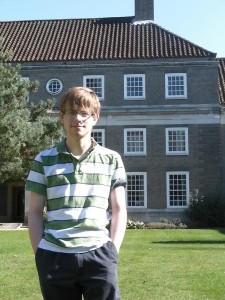 I first heard about Cambridge when I was in Year 10 at school. We were all in a computer room, having been told to look at the UCAS website, when I found the prospectus for Modern and Medieval Languages (MML) at Cambridge. It immediately intrigued me, but I didn’t really do much about this new-found interest for a few years.

When the time came to start thinking seriously about university, it took me a while just to decide what I wanted to study: it was a toss-up between languages and history. In the end, I just thought about which piece of homework I would rather do first – French or History – and that was that. Languages it was.

When applying, the first thing I had to do was to submit a UCAS application, followed by the SAQ (Supplementary Application Questionnaire). I was a little nervous about this, but there was really no need to be as everything was explained extremely clearly. It’s done online, just like UCAS, and so there’s no need to panic about sending it off in time!

The interview procedure for MML at Clare may seem daunting, but it’s really not as scary as it may  seem. You have one interview for each language that you’re applying to study. This meant one French interview and one Spanish interview. For French, I was given a poem 15 minutes beforehand and was asked to study it ahead of discussion in the interview (which was conducted in a mixture of French and English). Despite having done Spanish to GCSE, I was applying to study it ab initio, or ‘from scratch’: I was still given a text, but was asked whether I was able to figure anything out about it from my knowledge of other languages. The interviewers were also very keen to find out my reasons for wanting to study Spanish on such an intensive course.

MML applicants also have to sit a written test, which is specifically designed to be equally approachable for students of all languages. In my year, I was given a text on a pretty obscure topic (the history of reading glasses, I think …) and asked to write a summary of it in one of the languages that I was applying to study (I chose French). There were also a couple of analysis questions on the text, which were to be answered in English. To cut a long story short, I was very lucky and got an offer to study French and Spanish (A*AA, with the A* in French).

I arrived in Cambridge last October. Since then, I’ve discovered that the MML course is completely different to learning languages at school, since it sees language very much as a way to accessing culture, as well as being an end in itself. This means that, in my first year, I’ve had to study literature – but it’s honestly nothing to worry about. The literature element, while it may seem terrifying, is designed so that you can succeed regardless of whether or not you have studied literature before.

In my first year, I’m taking six papers: three in French (post-A-Level) and three in Spanish (ab initio). Both languages have a ‘Use Of’ component, which tests your knowledge of the language, as well as translation (from the language studied into English) and orals. The other two papers are both ‘scheduled papers’, which are basically cultural or specialist papers. My combination is unusual in that I have no choice in my first year: all French first-years do a general literature, film and linguistics introductory paper, whilst all Spanish ab initio first-years study an introductory literature module (which, owing to the vagaries of Faculty administration, is technically a language paper …). As you can see from the MML website, though, the choice of papers explodes from the second year onwards. At the moment I’m weighing up whether to study medieval literature, including some poems that push the boundaries of taste somewhat; whether to continue looking at the nineteenth-century period, which I’ve enjoyed so much this year; or whether to borrow a paper in sociolinguistics from the Linguistics Tripos.

The ab initio Spanish course is designed to take you up to A-Level standard in about a year. Like the Cambridge workload in general, it’s no picnic, but is still perfectly manageable if you keep on top of things. The main difference from the post-A-Level courses is that there’s a lot more language work involved, so our grammar workbook, Uso de la gramática española, has become my new best friend!

Across French and Spanish, I’m taught in three main ways. As I write this, lectures are just drawing to an end as exams approach, but I’d normally have around two French lectures and one Spanish lecture a week, each around 50 minutes long. The second method is language classes, of which there are two per week for both Spanish and French (both an hour long, with one of the French classes being in translation). For each of these classes, we have to complete around two hours of homework beforehand and hand it in; this may be a writing task, grammar exercises, or a practice test. The third method is supervisions, which are a big part of what makes Cambridge unique. Supervisions are small-group sessions between a teacher and up to four students, and I have them in French and Spanish oral, Spanish language, French literature and linguistics, and Spanish literature and translation. Many people find supervisions to be one of the most intellectually challenging elements of the MML course, since they offer a fantastic opportunity to learn at an extremely fast pace and to ask any questions. For the literature, linguistics and translation supervisions, there is always an essay or translation piece to complete and to hand in before the supervision, which you then discuss during the session. This is a really fantastic way to get feedback on how you’re progressing. Between all of these ways of being taught, I have around nine hours of contact time per week, which is more than most Arts students but less than Science students.

Outside of studying, I tend to relax through my involvement in clubs and societies. I’m a trumpeter in Colonel Spanky’s Love Ensemble, the Clare College jazz band; I handle some of the design work for Polyglossia, the University’s Modern Languages Journal; and I’m heavily involved in Access work, doing school tours and taking part in the annual Shadowing Scheme. I’m also a coxswain at Clare Boat Club, which is great fun and completely different from anything else that I do anywhere else!