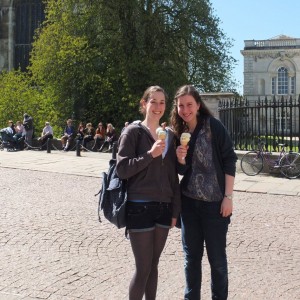 There’s no particular script for choosing a college. I liked the idea of a college with a river bank, which narrowed the choices a little. I visited Clare (among many other colleges!) at one of the Summer open days. Everyone I met was lovely and it seemed to keep up its reputation for being one of the friendliest colleges. It also has some of the best 1st year accommodation, is a nice size – not too tiny or too large and overwhelming – and has its own punts!

A year in, I think the very best thing about Clare is its openness and friendliness. The college feels like a proper community made up of a whole range of people and characters. One of my biggest concerns before starting at Cambridge was whether I would fit in. At Clare I really think that you’d have to work pretty hard not to! Right from day 1 I felt comfortable and looked after, never feeling judged or pressured to conform in any particular way – in fact there’s no stereotype to conform to! There’s also a real sense of integration – I have friends across all courses and years, undergraduate and graduate.

Studying at Clare is fantastic. Medics lectures are only a 10 minute walk away with a fudge kitchen and its free samples en-route. The FML (college library) is on the doorstep and has brilliant facilities, plenty of copies of the core text books, enough for each medic, and provides a half skeleton on a year loan to each 1st year. College teaching happens via supervisions. The number and format of supervisions varies between colleges. At Clare we typically have 3 – 4 supervisions a week each with 2 or 3 other medics. We discuss the week’s essays, lectures, practicals and get the opportunity to question experts! Supervisions are great, even if a little daunting at first!

Our college Buttery provides good meals, including the eagerly anticipated Saturday Brunch. There is also formal hall, open 4 nights a week, if you’re in the mood for something a bit fancier! Cellars, the Clare bar, is a great place to relax with a drink and a game of pool as well as hosting Ents every Friday, live music acts, comedy nights, quizzes and all sorts of other events.

One of the best things about Cambridge societies is that it’s largely up to you how seriously you want to take whatever hobbies you do. College societies tend to be more relaxed whilst if you’re looking for more serious commitment there’s always the uni societies. Clare certainly has societies for everyone and if not just set up your own!

Life as a Cambridge medic is busy, but there is plenty of time to get involved in things outside of medicine (in fact its probably a necessity!). I took up rowing (having never been anywhere near a boat before) in first term, am part of the university trampolining club, enjoy watching the debates at the union, go to Friday’s ents and generally find time to get involved in Cambridge life, so don’t worry about that!

I absolutely LOVE being a Clare medic and could not have chosen a better college (although I am a little biased!).

The main thing I found with Cambridge interviews is that they were quite science centered, more so than most of the other interviews I had. But, I think the main thing to remember is that they want to see how you think, not regurgitate so don’t worry about memorising everything and don’t panic when you don’t know stuff!

I had 2 separate interviews for Clare (with a couple of hours in-between). The first one asked fairly open questions but with a scientific basis. The second was largely data interpretation and picked up on a couple of points from my personal statement and the additional SAQ statement. The questions certainly couldn’t be crammed for! They involved coping with open questions and applying basic knowledge to come to a logical and reasonable conclusion.

The second interview was more about me. The questions were based on work experience but investigated whether I was actually interested in the work and asked me to show that I had probed deeper. Basically I think they want to see that you do work experience because you enjoy it and to learn from it, not just to tick boxes!

People often ask about what medical news they need to know, but I don’t think I got asked anything about medical news in either interview. Some of the questions might have involved some basic knowledge of the bigger stories and it might be useful to have an interest in something you’ve read so you can integrate it into an answer.

Although interviews will always be scary they were really not as bad as I was expecting. The interviewers tried to relax me and were encouraging rather than terrifying! I came out of the interview thinking it had gone fairly badly (which seems to be the case for everyone) but found that I had actually almost enjoyed the experience!

I think the main thing is not to panic. They will want to see how you think and work through a problem – not that you know everything about everything (exam results indicate that you know facts). They will ask you questions you don’t know the answer to so I suppose the best thing is to practice being yourself in interview type situations. I also did lots of just talking about objects before mine, which sounds insane, but I needed to practice open questions!
Try not to cram before the interview. Practice being yourself and talk enthusiastically about experiences. Try and enjoy the interview (or at least pretend you are)!