Clare hockey is a very relaxed club for women and men of all abilities. In this upcoming season we’re aiming to build on last year’s highlight of just missing promotion after losing in the playoff. So whether you’re an advanced hockey player, trying hockey for the first time or simply can’t resist the opportunity to don the fashion statement that is our bright yellow kit you’re very welcome to join us. The time commitments are the Matches themselves (unless we get a squad who are particularly keen on some more training sessions). The Matches are pretty much once a week on Sundays in the first two terms then in summer term there are a couple of fun tournaments. Throughout the year there will also be the occasional social with other hockey clubs, which typically involves Nanna Mexico followed by Cindies. I also intend to search for a lucrative deal combining us with another college, which could see us promoted without winning anything. I would like to reassure everyone that I wouldn’t enter this deal if I thought they were only going to take a few of our best players (for one thing because I wouldn’t get a game myself) or if it meant we’d have to stop wearing garish yellow – we are a college of standards.

There will be a training session and match at the start of term for new members. 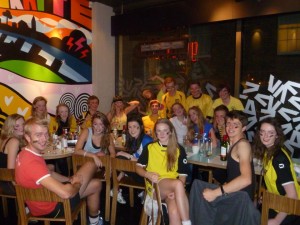